I made a few minor changes to the coding of the site, checked that the content was (I hope) up-to-date, and deleted some dead external links.

I re-designed the site again in April to make the pages easier to read and more accessible. Eight people joined the Find a Friend list, and I added several comments to Our In Tray and a number of new links. I added more information about burn scars, and split the original page into two: Scars and Treatment and Surgery for Scars. Other new pages created were: Joni Marie Duck's Story, Yasmin Stalford's Story, an Accessibility Statement, and a Statement of Ethics. The site received HONcode Certification and won thirteen Website Awards.

Six people joined the Find a Friend list. I added a 'search this site' function, another Fiery Font, some new Salamanders Wallpapers, and a few new links. The only new page added this year was Kylie's Story. The site received APEX Certification and four Website Awards.

I made some more improvements to the design and coding of the site. Seven people joined the Find a Friend list. I resigned the site from any involvement with web rings, and added several jigsaw puzzles to the Fun Stuff section, more information to How Hot is 'Hot'?, a couple of items to the Just for You page, several comments to Our In Tray, and a number of new links. I created six new pages: April's Story, Glenn's Story, Kelly's Story, Steve's Story, Emergency Numbers, and this Site Updates page. The site won 45 Website Awards.

Two people joined the Find a Friend list. I added two Fiery Fonts and five colouring pictures to the Fun Stuff section, more photos to The face of a burn and Quinn's Photos, a new comment to Our In Tray, and a number of new links. I created two new pages: Fact and Fiction Books, and Burn Survivors Biographical Books. The site won five Website Awards.

I removed the almost-dead Forums and Chat Rooms section. I added more links to Fact and Fiction Books, split the page into Books for Children and Books for Teens and Adults, then moved them (together with Burn Survivors Biographical Books) from the Links: Other Sites section to a new one: Links: Books & Comics. I also created an About me page, and split the main Certifications and Awards page into two, creating a separate list of Awards won. I made a few changes to the text on, and added an illustration to, Surgery for Scars. I added the "Fire Kills" printable leaflet to Playing with Fire, some new comments to Our In Tray, and a number of new links. The site won 40 new Website Awards.

One person joined the Find a Friend list. I made a few minor changes to the wording and layout of some pages, and replaced over 40 dead links. The only new page added this year was Dennis Opoku Gyamfi's Story.

saw the first major change in the content and purpose of this site. When it first went online, most people found sites via web directories or webrings, so I tried to link to every site that might be of help or interest to burn survivors and their families, as well as a large number of burn and fire safety sites. With most people now using a search engine, I removed almost 400 links, leaving only those which people might not think to look for and those which might not be easy to find.
Originally, one of the main purposes of Salamanders Young Burn Survivors was to give burn survivors a way to find and make friends with each other, but with most people now using Facebook or a similar social networking site, this site's "Find a Friend" and "Just for You" pages had outlived their usefulness, so I removed them.
I also removed the Guestbook (unused for several years) and the Salamanders Screensavers (which don't work on modern computers). I added four cookery recipes, some new wallpapers, and three games to the Funstuff section. I re-wrote the html and css coding for the entire site to make it fully accessible to anyone using non-standard equipment, reviewed all the content, updating and re-writing it where necessary, and replaced a number of graphics.

Virgin Media decided to axe their web hosting service, so, after twelve years, I had to find a new home for Salamanders Young Burn Survivors. Luckily, I had to make only a few very minor changes to the coding to get it back online with Neocities.

This site has now had four major re-designs since it first went online in March 2000. Click any of the screenshots below for a better view. 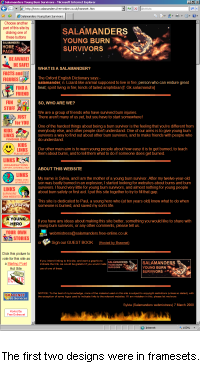 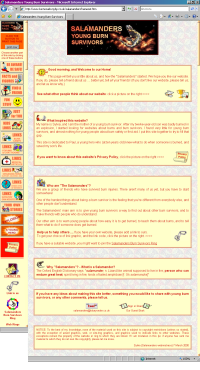 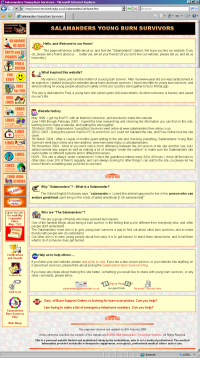 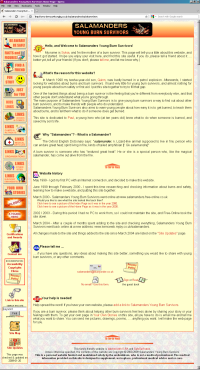