Fire is useful -- Fire is fascinating -- Fire is fun -- But PLAYING WITH FIRE CAN BE DEADLY!

People have been using fire for over a million years. Most people in the world still use fire for heat and cooking.

Fire is fascinating to watch. With its changing shapes and colours, it seems almost to be a living thing, and because of this it has become a symbol of life and hope.

Before every Olympic Games, a burning torch is carried from the last place the Games were held to where the new Games will be, and the torch is kept burning until the Games are over.

Fires and candles are a part of many religious ceremonies, and of celebrations like birthdays and Halloween. Lots of people celebrate special occasions with fireworks as well.

Almost all young children are curious about fire. They want to know how fire looks and feels, what it can do, and how it works. Because of this, they light small fires or play with matches and lighters. They may also try to copy adults by lighting candles, cigarettes and fireplaces.

Many fires started by curious children are in or near their homes - in a cupboard (closet), a bedroom, or the back yard - and the awful truth is that a fire started by a curious child can have the same terrible results as one started by an arsonist (someone who deliberately sets fire to someone else's property).

Children who are old enough to understand the idea of cause and effect can learn that fire is dangerous and that it can injure not only themselves, but also their family and their home. With the help of an adult, children can learn to use fire safely. Even young children can learn that a match is a 'tool', not a toy, and, like other tools, it should be used only in the right way.

Older children can help to teach younger sisters and brothers about fire, and join in with planning fire safety around the home.

The Deadly Dangers of Juvenile Firesetting

Children start almost half of all fires deliberately set in the USA. Once started, these fires can very quickly get out of control, causing enormous amounts of damage to property, and badly injuring or even killing people!

One of every 13 building-fire deaths in the USA is caused by a child setting a fire.

Nine out of ten people who die in fires started by children are children themselves.

Children playing with fire cause more than a third of preschool child deaths by fire.

One out of every three children who die in home fires actually start the fire that kills them.

The problem is that most young people think they are indestructible, like Superman, and it takes a lot to get them to think about the possible results of what they do and to realise that they can be badly hurt or even die.

This is a free postcard-sized leaflet designed to make young people think about the dangers of firesetting: 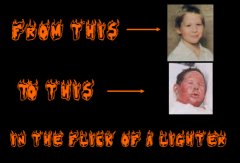 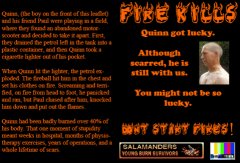 If you know of anyone whom you think this "Fire Kills" leaflet might help, you can download the pdf file from here.

Click here to go back to the main "BE AWARE! BE SAFE!" page
To find out more about burn safety or fire safety, click on one of these links: