For ten-year-old Paul, the 7th of March 1998 started off like any other Saturday. It rained all morning, but the sun came out at lunchtime so, in the afternoon, Paul went off to play in a nearby field with his twelve-year-old friend, Quinn.

There, the two boys found an abandoned motor-scooter. They drained the petrol-tank into a plastic container, and were about to start taking the scooter apart, when Quinn took out a cigarette lighter. Paul shouted a warning, but it was too late!

In Paul's own words:

'The container started to melt and the petrol started going everywhere, and then it went up with a whoosh. I jumped back, but he was closer to it. It went straight up in his face.

'I saw him on fire. All of him was on fire; he was running towards the gate crying, "Help, help!". I shouted, "Quinn, get down on the ground; don't let the air get to you," but he didn't.

If Paul hadn't been with Quinn that day, or if Paul hadn't known what to do and done it, then Quinn would almost certainly have died. (He seems to have been running towards the nearby river, possibly just thinking of water to put out the fire, but he probably wouldn't have made it that far. Even if he had made it to the river, he would have been burned very much worse than he was.)

Paul's actions were especially brave because he is a burn survivor himself, scarred by hot cooking oil when he was just a toddler, but when his friend needed his help he didn't stop to think about himself.

Within hours, local radio stations were broadcasting the story, and Paul's bravery was praised in that evening's local television news programmes.

When the next edition of the newspapers came out, on the Monday, Paul made the headlines! He was on the front page of the local papers, and featured in other newspapers all over the country.

Later, Paul helped a camera crew to re-create the event on video. His was the first story featured in "999 Young Lifesavers", a special episode of the BBC television programme "999 Lifesavers".

Paul also received an award from The Society for the Protection of Life from Fire. 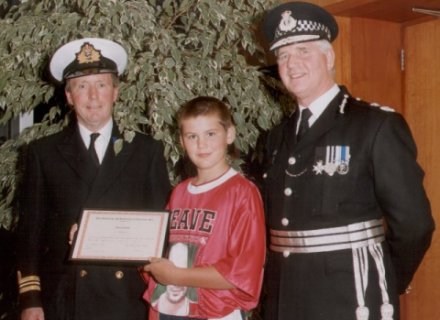 "I felt a bit scared when it happened," Paul admitted, "but it's nice to be a hero." However, he never let all the praise go to his head ..... he told people, "I just think I did the right thing."